Exclusive releases are not uncommon in the cigar industry.  I cannot speak for every company that comes out with these special cigars, but us here at the CDM family of stores, we pride ourselves on these releases.  These aren’t just a way to put another cigar out on the market.  These are a chance for us to share our cigar expertise with our wonderful customers.  Its a way to ensure an exquisite cigar smoking experience that we can stand behind not only with full confidence that we are providing a to quality product, but with 100% pride in the work we put in to develop each blend.

Our most sought after exclusive release is arguably the Drew Estate Liga Privada UF-4.  Originally released during the inaugural Halloween event at Casa de Montecristo with Jonathan Drew, it originally had the name JD-4.  These have been slightly changed each release, and have come out once a year, at the Halloween event.  Drew Estate’s Liga Privada line has paved the way for sought after boutique cigars on the market and the UF-4 is no exception.  Packaged in bundles of 10, the UF-4 is one of the rarest and best Liga’s you will ever find (or try hard to find).

One of our most successful Exclusive Releases is produced by none other than the legend of boutique cigars…Ernesto Perez Carrillo.  From his original El Credito Factory with La Gloria Cubana and now his self named brand, he has given cigar smokers some of the greatest premium cigars this decade.  Due to this, we worked tirelessly with Ernesto to come up with the Generosos line.  A medium to medium full blend full of complexity and prominent nutty flavors with a hint of spice on the back end.  A truly exceptional cigar for any cigar aficionado.

As one of the first retailers to carry Don Pepin’s cigars, we have had a long standing relationship with The Garcia Family.  Once while on a tour of their factory, our owner Mike came across a bale of tobacco.  “This smells like a Chocolate!” Mike exclaimed.  Mr. Garcia raised an eyebrow and walked up to Mike.  Then, without hesitation, Don Pepin pulled the cigar from Mike’e mouth, removed the wrapper leaf, and rolled one of the “chocolate” leaves over Mike’s cigar.  Mike fell in love, and that is how our Oro de Nicaragua from My Father Cigars was born.  This is a must try cigar.  There is nothing else like it in the My Father Portfolio.

As that relationship carried on, it was natural for our relationship with Pete Johnson of Tatuaje to grow as well.  After several years of development, we brought out the Tatuaje Jackal.  A blend of Pete Johnson’s famous Tatuaje Halloween releases (and some other special tobaccos), The Jackal delivers everything you’d expect from the Tatuaje brand.

We have customers from all walks of life, and many of them wanted a more budget friendly cigar, that quite frankly, was also friendly to the palate.  We listen to our customers and talked to a few factories about developing a unique line of cigars where every size featured a unique blend.  This isn’t an easy task when talking about an exclusive line, but our friend Manuel Quesada of Quesada Cigars was ready to take on the task.  We called this project “Sons Of Freedom“.  Each blend and size was uniquely developed with our customers in mind.  The right right size and blend combination to maximize the potential of the fantastic long filler tobaccos featured in the Sons of Freedom cigars.

Wonder smokes and wonderful prices.  This partnership also led to our stores obtaining two exclusive sizes of the incredible Quesada Espana line.  A slow burning 7×54 fat churchill called the Fabulosos (the PERFECT golf cigar), as well as the connoisseur special, the 7×42 Beli-Lance which is a lancero with a torpedo tip.

Then there are the projects that you don’t plan on, but are too good not to do them.  While in Miami for a business meeting, our other owner Sam met an older gentleman in Little Havana.  Both had cigars in hand and a conversation was struck.  This gentleman claimed to have some “inside knowledge” of the Cuban Cohiba Factory and told many stories.  Sam was skeptical but when this gentleman claimed he could roll Sam a replica of the Cohiba BHK 56, he was intrigued.  The man did not lie.  This cigar tastes just like the famous Behike. The B56 as we call it is a tremendous cigar and many smokers in the Chicagoland area flock to our stores just to smoke these beauties.  Even Chicago Blackhawks Head Coach Joel Quennville claims this as his favorite cigar! 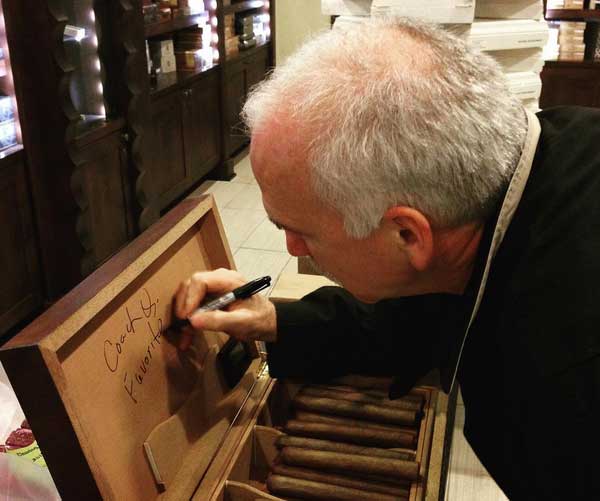 We love cigars.  We love this Industry.  And we love to provide the best cigars to our customers.  Check out our exclusive releases.  You won’t be disappointed.